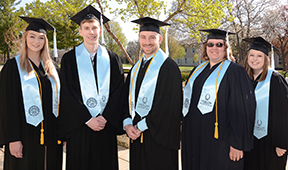 FAYETTE, Iowa (May 4, 2019) – “As I look out at this beautiful crowd, I am aware that you all have a story about the journey that brought you to this point,” Upper Iowa University (UIU) alumna Lisa Richards ‘93 said as she addressed UIU’s 2019 graduates during Saturday’s two commencement ceremonies. UIU graduates attended a morning or afternoon ceremony at Harms-Eischeid Stadium in Fayette, Iowa, depending on the degree received.

“For several of you, it was to get the degree needed for the next step in your already established career,” Richards said, noting diverse paths students take in getting to this point in their lives.  “You are already busy with your life and raising a family – UIU’s flexibility and vast options allowed you to complete the next milestone, as UIU is an Education Built for Life.  For some of you, UIU served as your first step in your journey and you will soon be entering the next chapter.”

A native of Fosston, Minnesota, Lisa (Maanum) Richards earned bachelor’s degrees in marketing and psychology at UIU. She currently serves as chief experience officer for Starkey Hearing Technologies in Eden Prairie, Minnesota. As part of her duties, Richards provides strategic direction for a team of over 140 members. She and her husband, Steve, reside in Monticello, Minnesota. The couple has five children and one granddaughter.

“I gained much more than an education while at UIU,” Richards said. “I gained lifelong friends. I gained confidence. I had people push and build into me. I had people care for me, coach me and guide me. I call these people the angels in my life and I cherish them still today. I hope, as you look back at your UIU journey, you can identify people that have had a similar impact on you.”

Before her death, Barbara (Rankin) Csomay, class of 1946, established UIU’s Csomay Honors Program. To be accepted into the Honors Program, students must have at least a 26 ACT score and at least a 3.5 high school grade point average. Students admitted to the Honors Program in any given year take the same courses as their fellow honors students. Each course generally is interdisciplinary and team taught, with active, participatory learning. All honors courses require extensive, integrated, advanced writing skills. Seniors complete both an honors project and a thesis in their area of interest. Extracurricular experiences – such as service learning, attending professional conferences and other special events – are an integral part of the program.

“Today is a day that is all about you and your experience as you celebrate this outstanding accomplishment,” UIU Alumni Association president Angie Joseph ‘82 said while closing the ceremonies. “We hope you will include Upper Iowa University in your many happy and successful tomorrows.”

During the two commencement ceremonies held at Harms-Eischeid Stadium, approximately 600 graduates walked across the stage.  In 2019, 1,504 students completed their associate, bachelor’s or master’s degree requirements at all UIU locations. Of those, 195 graduated from the Fayette location, 839 completed their degree at one of UIU’s 21 locations throughout the United States, 349 graduated through online or self-paced study programs, and 117 were from the University’s international centers in Hong Kong and Malaysia. UIU is one of the most diverse universities in Iowa. In all, the graduates represented 39 states and eight nations.

Commencement photos will be posted on Flickr at https://www.flickr.com/photos/upperiowauniversity/.

In addition, the 2019 UIU graduates have been invited to participate in the My Success graduation page. To view a few of the 230-plus responses, visit https://uiu.edu/future/mysuccess/index.html.