The exhibition presents a selection of mixed media works by the artist that projects the artist’s studio practice during the past two years of the pandemic. Through what Li calls a reinterpretation and redefinition of daily materials and familiar media, he transforms the gallery into a space for contemplation, provoking the viewer to think about how our bodies respond to the location. Says Li, “Consideration for how the subject could respond to the space is always embedded into my working process. The exhibition itself is an invitation. The arrangement and sequence of the work is a concrete poem, a puzzle that needs to be unfolded by the viewers.” Li continues, “My work often takes many pauses. I like to wait for the right moment to reveal how one fragment, thought, or gesture could start drifting, how the pieces connect, iterate, and duplicate among different media, forms, and materials.”

On the west side of the gallery wall, four collaged sculpture pieces called We’ve never been this close to each other, made of corrugated cardboard with printed risograph abstract patterns on top, were displayed in sequence. Speaking of this work, Li says, “One day, when I passed by the recycling bins in my studio with all their leftover cardboard packages from online orders, I started to wonder about them—curious about their origins, where they’ve been packed, shipped, loaded, and unloaded, etc. To imagine every piece of cardboard is a fascinating mixture of autobiography and adventure… the material carries its own memory.” According to Li, cardboard reflected a globalized, collective daily living condition even when the world was experiencing widespread isolation and disconnection. Continues Li, “The juxtaposition of repeated patterns and collaged cardboard implicate the narrative in a sense of reality.” 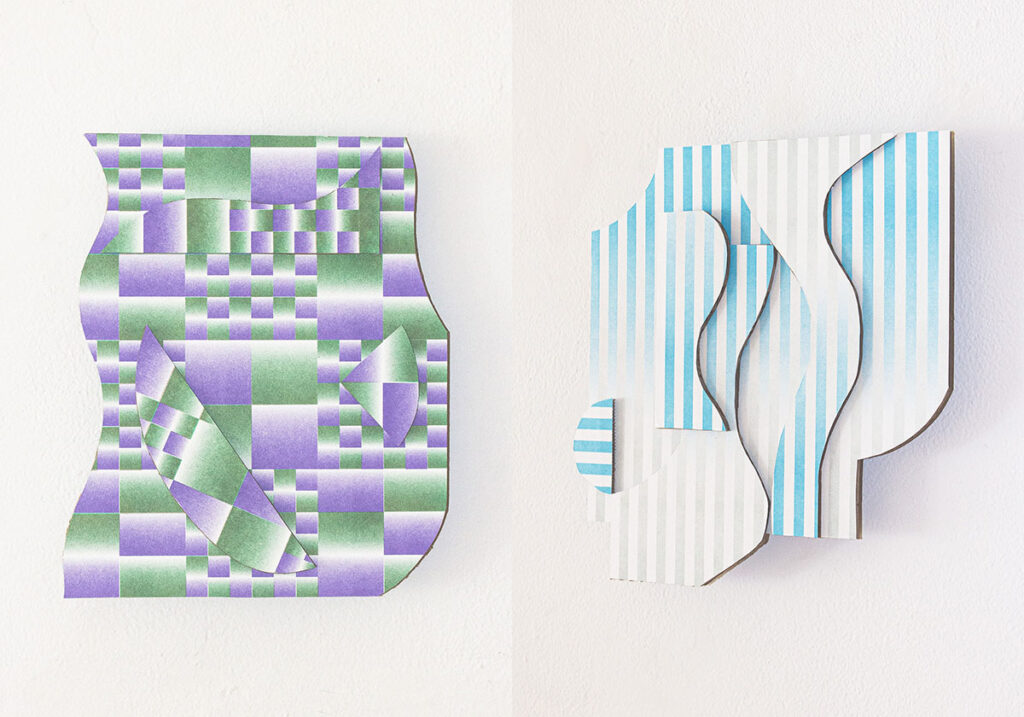 We’ve never been this close to each other, 2022, corrugated cardboard, risograph prints, wood panels, various sizes, courtesy of the artist

Next to the sculptures is a video installation consisting of a vertical screen placed behind a semi-transparent curtain. The video on the screen is a loop of the artist’s ongoing web-based video series titled Impermanent Space. “The screen manifests as a ‘window,’ both in the physical and digital sense—the window in front of my studio, the window of a video call, a browser window,” said Li.

The artist’s work entitled Fragmented Body #2 hangs in the center of the gallery space as the result of a process that Li calls “improvisational choreography.” Says Li, “When the pressure was released from the rotary cutter to the canvas and the tension from my body started to shape and direct where the curve went, the flat surface turned it into a sculptured ‘body’.” Li notes that the movement of the piece continues to flow into the three pastel drawings and two collage works that are shown in the exhibition.

The series of canvas paintings titled Anonymous sound to notations is arranged in three groups and presented on the same wall. The artist collected audio recordings outside of his studio’s window and later translated these sounds into abstract notation marks on the canvas, layered on top of a sequence of horizontal colored block backgrounds that cross the canvas. Li notes that this series is intended to be contextualized with other works for the exhibition: “the background colors imply an internal grid system—a pattern that also appears throughout other works. When your eyes follow the grid and start to move up and down, the movement of the exhibition becomes apparent; it’s always drifting.”

Zhongkai Li earned a Master of Fine Arts degree in graphic design from Yale University and a Bachelor of Fine Arts degree in communication design from the Central Academy of Fine Arts. He has held solo exhibitions in Shanghai and New York, as well as participated in group exhibitions and screenings worldwide. His recent curatorial project Radical Return received a grant from Mass Cultural Council and won the 2022 Communication Arts design competition. He is part of the Jury panel for the 2022 and 2023 Young Ones Awards from The One Club for Creativity in New York. Li has previously taught at the Parsons School of Design and given public talks and lectures in different institutes, including the Royal College of Fine Art, Rhode Island School of Design, Boston University, and Pratt Institute.

Bing-Davis Memorial Gallery is located in Edgar Fine Arts Hall at UIU’s Fayette Campus. The gallery is open 8 a.m. to 5 p.m. Monday through Friday. Hours are subject to change.