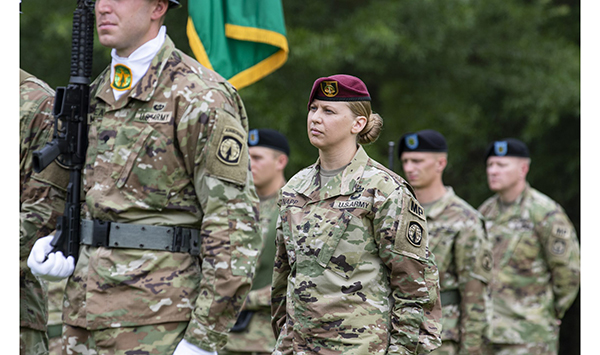 “Command Sgt. Maj. Knapp is the first leader in this historic division to have led both men and women at every level, from team leader to squad leader, all the way through brigade command sergeant major,” said Lt. Col. Kari McEwen, division public affairs officer.

Knapp’s selection additionally constitutes a milestone for the U.S. Army, as she is the first woman to serve as the command sergeant major for an Army division.

“Selecting a leader like her opens the door for our Soldiers to experience the outstanding leadership of those outside of the combat arms branches, and that’s something we’ve been missing,” said McEwen.

The ceremony will be live-streamed on the division Facebook page at www.facebook.com/101st. For additional information about Knapp’s accomplishment, view articles published in the Clarksville (Tennessee) Leaf-Chronicle at https://bit.ly/3bXGsYT or at military.com at https://bit.ly/2SwhIAh.