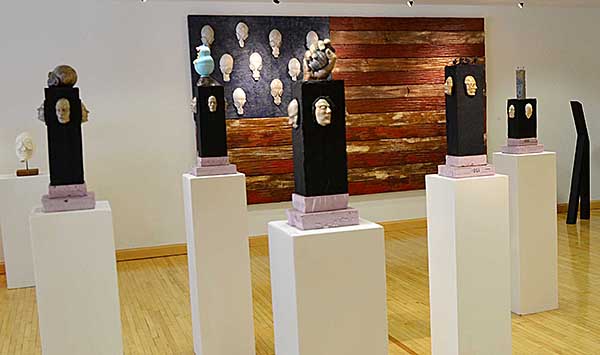 Sansone holds a Bachelor of Fine Arts degree from the University of Illinois Urbana Champaign and a Master of Fine Arts degree from the Herron School of Art and Design in Indianapolis. After completing his BFA studies, the Chicago, Illinois, native spent two years working for an aerospace company producing fabrication and assembly drawings for satellites, military aircraft and mobile artillery units. Sansone later spent over a decade in the tradeshow industry where he oversaw worldwide exhibition programs for major multinational corporations, most notably Apple, Inc. The time spent in these two industries had a profound impact on why he embarked on a career as an artist and how he approaches his practice.

According to Sansone, he interprets contemporary events by drawing inspiration from moments in history and utilizing a multi-disciplinary approach to address the modern world. No single process or material deﬁnes his practice and he takes a very experimental and investigative approach to his art making. The traditional process of cast objects and repetition play central roles, but he continually investigates new methodologies in order to adhere to his motto of ‘working in ideas.’”

“My current body of artwork is a critical response to the current geopolitical landscape, created by the disproportionate role of the military industrial complex in our society,” Sansone said. “Militarism has seeped into every segment of our culture; from building ‘defensive’ walls on our borders, to calls for arming our teachers and children. Fear and paranoia ooze from our pores as we cower in imaginary foxholes on battleﬁelds that do not exist. Always a new enemy, always some new evil to vanquish, war without end.”

“Ultimately, my goal is not to answer the questions or propose solutions for the viewer, but hopefully to cause them to consider, with more than a cursory glance, the reality we build for ourselves through the choices we make as individuals and how those choices impact our civilization,” he added.

Due to the COVID-19 pandemic, University officials previously announced the decision to forego the traditional in-person artist’s receptions to keep both the UIU community and visiting artists safe. Instead, each of this year’s exhibits include an online video interview featuring each of the participating artists. Sansone’s presentation can soon be viewed at uiu.edu/art-on-campus/bing-davis-memorial-gallery/.

The remaining 2020-21 Bing-Davis Memorial Gallery schedule is as follows:

Additional information about these artists and their respective exhibits will be announced at a later date.

Bing-Davis Memorial Gallery is located in Edgar Fine Arts Hall at UIU’s Fayette Campus. The gallery is open 8 a.m. to 5 p.m. Monday through Friday. Hours are subject to change. Social distancing and face coverings are required at the Gallery and Fayette Campus.