In 1978, Congress passed a joint Congressional Resolution to commemorate Asian American Heritage Week during the first week of May because of two important anniversaries. First, the arrival of the first known Japanese immigrant to the U.S. on May 7, 1843; secondly, the completion of the transcontinental railroad on May 10, 1869, which upwards of 20,000 Chinese workers helped to construct. It was not until 1990 that the observance was expanded to a month. The month pays tribute to the generations of Asian and Pacific Islanders who have enriched the United States’ history and are instrumental in its future success.

Thank you to the Multicultural subcommittee, a subcommittee of the Diversity and Inclusion Committee. Interested in serving on next year’s planning committee? Please contact the Assistant Vice President for Student Life, Danielle Rosario Cushion, at [email protected]

I suppose our class never had such a thing as “a class letter” In the past, had they? Well, it is so sweet to hear from you that our class mates are all doing so nicely In their works, especially for the college.

Now, I wish I could say also like the others, but as you probably know our race (Japanese) are always have been discriminated against In this country, and sometimes we were persecuted as well; so we had to work hard and take time for the success.

I appreciate very much the good influence I received at U. I. U., I ought to do all in my power for her.

Please find enclosed cheque one hundred dollars, which Is my very best even If it is very small amount; yet If you accept It for me as “a widow’s mite.”

It will please me much, as I donate the same with true devotion and grateful heart for the institution. 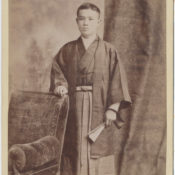 An early Japanese student at Upper Iowa in traditional clothing of the time.

Did you know that Asian Americans report less discrimination in employment, housing and criminal justice compared with other racial minorities in the United States. But they often fall victim to a unique set of stereotypes—including the false belief that all Asian Americans are successful and well adapted—that render them invisible in discussions of race and prejudice in America. (Source: Countering stereotypes about Asian Americans)

Listen to panelists talk about their experiences. Panelists are:

Please click the link below to join the webinar:

Storytelling and Stereotypes: Asian American and Pacific Islander Month at Upper Iowa University and in Fayette – Storytelling can help dispel stereotypes that surround an ethnic group. Listen, Lunch, and Learn about stories told by people with the UIU and Fayette Libraries about Asians, Asian Americans, and Pacific Islanders in history, including in Fayette and at Upper Iowa University.

In conjunction with the official theme for the observance of the Asian American, Native Hawaiian and Pacific Islander Heritage Month this year: “Advancing Leaders Through Collaboration”, we are celebrating AAPI individuals’ (leaders’ in their respective fields/areas) aspiring and motivating stories, perspectives and moments that feel both ordinary and extraordinary.

The recipe served at the Fayette Campus was submitted by UIU Student Guin Calpito.

Registration is in Grace Meyer Square. Participants will run 1 mile around campus and end at the Victory Gate. Free to register and prizes for 1st male and 1st female.

Come outside for a fun run and celebrate the Festival of Colors! Get showered in a rainbow of colored powders symbolizing energy, life, and joy as you run or walk your mile to the finish line!

Holi is a Hindu spring festival, that falls in the months of February or March, which originated in the subcontinent of India and is celebrated across the world. Often called the “Festival of Colors,” and the “Festival of Sharing and Love,” there are several legends about the origin of why Holi is celebrated. The timing of Holi, is synchronized with the moon, which means that the actual dates vary from year to year. This year Holi was observed on sundown of March 17th ending at sundown of March 18th. Learn more about Hindus and Hinduism – Hindu American Foundation.

Released in 2021, this film is starring Kea Peahu, Lindsay Watson, and Kelly Hu

A summer in rural Oahu takes an exciting turn for two Brooklyn-raised siblings when a journal pointing to long-lost treasure sets them on an epic adventure with new friends, and leads them to reconnect with their Hawaiian heritage.

Email Shannon Nix at [email protected] for the link. The link will be emailed to you the day of.

TED Talks: I Am Not Your Asian Stereotype a Ted Talk by 18- year old Canwen Xu

Bad driver. Math wizard. Model minority. In this hilarious and insightful talk, eighteen-year-old Canwen Xu shares her Asian-American story of breaking stereotypes, reaffirming stereotypes, and driving competently on her way to buy rice. Canwen Xu’s slogan for life is “Canwen can win.” Born in Nanjing, China, she moved to the United States when she was two years old, and since then has lived in some of the whitest states in the country, including North Dakota, South Dakota and Idaho. A senior at Timberline High School, Canwen is passionate about politics, and is the national membership director and Idaho state director for the Young Democrats High School Caucus. Also a programmer, she started an all-girls computer science workshop called Code For Fun and received National Runner-Up in the 2014 NCWIT Aspirations in Computing competition.

Students from different nations and cultural background come together to create integration among international students of all races and the university community, as well as to assist the students in the transition into American culture.

By organizing this association, we hope to fill gaps between all international students, no matter the country of origin. As an organization we focus on the educational, cultural, and social aspects of university life in order to serve as a connection between International and American Students.

ISA strives to promote and improve international students’ ability to adjust to American life and also to establish an advanced communication channel between the countries.

Jesica Yap is a Hollywood composer for the visual media, a music producer, a pianist and a teacher residing in Los Angeles, California.
Achievements: 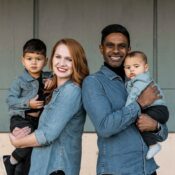 The Kummar family is inspiring thousands via their Vblog with almost 270 thousand subscribers on YouTube.

Logesh Kumaar and his wife Rachel started their own YouTube channel just a little over a year ago and shared their family’s “cultural adventures”.

The couple stresses the value of being grounded in culture, and viewers are delighted in their cross-cultural efforts and in trying to integrate values from both the American and Malaysian cultures in bringing up their two sons, adorably nicknamed Zay-Zay (Zaden Kumaar) and Kay-Kay (Kyren Kumaar).

Check out the Kumaar family on their YouTube channel.

Send Chinatown Love, which supports restaurants, many of which are immigrant-run and cash-only and so were rejected for government aid.

Detox Local – An extensive list of mental health and substance use resources specifically for the AAPI community.